Tom Mazzocco
California, United States
Animation professional since the age of nineteen. Still working in the dwindling world of 2-D hand-drawn animation. Positions I've held include: Director, Head of Story, Storyboard Artist, Animator and Animation Timer. It's been a great career and I'm not ready to give it up just yet.

Here it is. It's only 4 seconds long, so don't blink.
A Quicktime movie of my first animated scene using Photoshop and ImageReady to process the drawings.
I think it works pretty well.

Just in case I win the Oscar for this scene, I'd like to take this opportunity to thank my inspiration and muse.
To my inspiration, my tiny little son Jack. Without you the baby wouldn't be as cute or fun.
To my muse, my very lovely wife Gypsy. With your encouragement and love I feel I can accomplish anything.

And now, onto another bit of animation!!
Posted by Tom Mazzocco at 5:56 PM 2 comments: 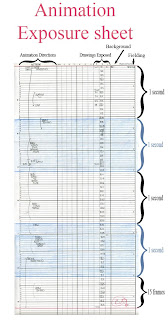 I've timed out the scene with a stopwatch. It'll take nearly five seconds to show the actions I want.

Then I filled out the left column of my Exposure-sheet (or X-sheet) describing accurately, to the frame, when I want things to happen.

The drawing numbers were then exposed in their columns.

X-sheets are frame by frame instructions for shooting or compositing the animation. Each row corresponds to one frame. In this case it takes 25 frames to add up to one second. The columns signify the different levels for the animation. The baby is "B" level, the spoon "S", and the chair I've called "BG".

After the X-sheet was filled out I went ahead and animated the scene. You can see that I reused some drawings at the head and tail of the scene. I also made tracings of the first drawing and cycled them to keep the animation alive. I like the hand drawn look and aspect of traditional animation and I don't really want to spend my time making my drawings "perfect".

Now that the animation is finished the drawings get scanned and imported into photoshop. More on that soon.
Posted by Tom Mazzocco at 9:48 PM No comments:

Before I get too deep into my little production I want to animate a short test.

That's it. Just a simple gag. Quick and easy to animate and evaluate.

Since I'm using Adobe Photoshop and ImageReady to process my animation and they export animation at a frame rate of 25 frames per second (instead of the normal film speed of 24 fps) I want to see if this will make a difference. Also, I want to get a handle on the character design.

First I drew the key poses. 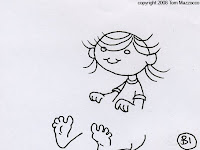 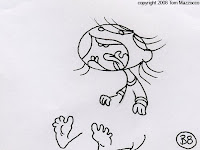 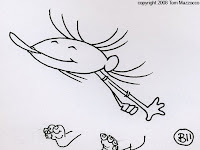 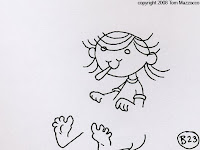 B23 - Back to start pose with baby eating the spoon.

After checking out these poses I decided to give the action a little more snap and made a more extreme open-mouth drawing. 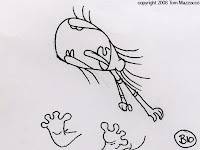 Now all I gotta do is inbetween it. No sweat.
Posted by Tom Mazzocco at 4:44 PM 1 comment:

I've made a layout drawing of the baby sitting in his highchair. The goal here is to design a composition that allows the action/animation to read clearly and is staged so that the gags and acting are the focus. I've allowed space for a spoon to enter from the left, this also gives the baby room to lean forward and bite food from the spoon. 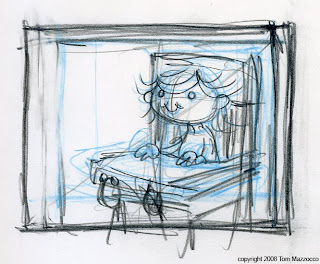 Because I am doing this project alone I needn't clean-up my layout. I am also working quite small. This layout is drawn at a 4 field, roughly 3"x4". (more about fields in a later post)

The choice of working smaller was made for a few reasons. First, it's a good size for me to draw and not fuss too much over details. Secondly, when animated, I want the hand-drawn line to be part of the life of the animation. Another reason for the small drawing is a technical one, it takes less time to scan a small drawing.

I began by roughing out the drawing in blue, as you can see, and after looking at it for a moment I noticed that I had made the field too tight, not enough space around the baby. As a matter of fact I had cut his cute little feet off. The back of the chair was also uncomfortably close the right edge of the frame. When I tightened up the drawing in black, I widened out a bit and it felt much better.

I'm pretty happy with this layout. It meets the needs I have for composition and clarity. Now I can begin animating. Since I'll be doing some tests and experiments I'll keep the scene short, about 5 seconds. This will be long enough to give me enough information to make some choices that will, hopefully, give me the look I'm after. And it will be short enough to get it done quickly.
Posted by Tom Mazzocco at 11:19 PM No comments:

To work out how I want the gags for my cartoon to work, I've made little storyboard/gag drawings or thumbnail sketches. These are small, rough and quick sketches. Essentially these are ideas on paper. In a studio production these would ordinarily get cleaned up and submitted as a storyboard, but since I'm doing this myself, I'm not going to need clean boards. 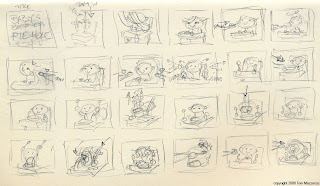 Thumbnails are quick and easy to draw and, if it turns out that they don't serve the main idea, they are easily discarded.

Animators also use thumbnails to plan out the poses for their animation.

In the thumbnails for my cartoon the baby is lowered into his highchair, a spoonful of food is offered from the left, he twists away from it. More food is offered from the right, which he also declines. Both spoons enter, he grabs them, propelling the food back at the offscreen servers. A bowl of gloppy food is deposited on the tray. He raises his fists high and slams them down on to the tray sending the bowl and it's contents flying up out of frame. The bowl lands quickly, then is filled with the gloppy food. The baby laughs and does it again. He laughs again and tries it a third time and accidentally hits the bowl, splatting the food onto his face. A spoon enters and scrapes the food from his face and feeds it to the now cooperative baby.

This is just one page of thumbnails I've made for this little film. Time will tell how many pages of sketches I will need before the short is finished.
Posted by Tom Mazzocco at 9:24 AM No comments:

About eight years ago a few friends and I got together to brainstorm hoping to come up with ideas for animated shows. Maybe something for the networks, maybe the internet. We all just wanted to have some say in the content of shows we worked on. Each of us had been in animation for many years and we sensed a change in the way shows were being developed and promoted and with the rise of Flash as an animation tool we thought we could make a show ourselves and then sell it to the big guys.

We had fun that day but, by consensus, we didn't have anything close to a real solid concept. Some ideas were good, but needed more development. Others made us laugh but were, for a variety of reasons, unproduce-able.

One of my ideas wouldn't fade. The concept and title of which stuck with me for a long time.

"Baby's Bottomless Pie Hole" is a title that never left my sieve-like mind. The concept was simple, too. A baby eats voraciously. That's kind of it. There were and are, of course, variations on this but it pretty much stayed like this in my head for quite some time.

I think it was the charming name.

With the recent arrival of our now 16 month old baby, this idea sprung forward and with added inspiration I've been able to design and plan some short animated spots. I've thumbnailed one of them and have ideas for more. The design has come relatively easy (finally) and the process of producing these is one of trial and error.

For now, here are my preliminary designs for the baby: 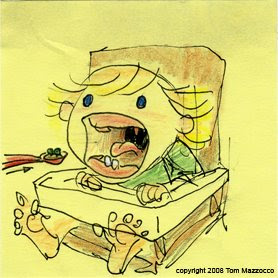 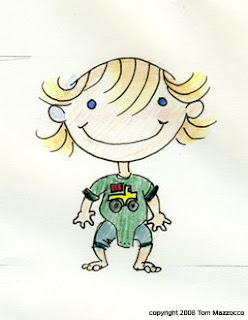